Axolotl are cool looking creatures! They’re famous for their large, expressive mouths. They always seem to be smiling! They look so innocent, with their beaming, toothless grins. It’s no wonder people love them so much!

Well, this might come as a surprise, but axolotls do actually have teeth! You probably haven’t seen them at all – after all, it can certainly seem as if they don’t have teeth.

However, inside their mouths are actually upper and lower rows of teeth – although they’re not quite like teeth as you might be used to!

They’re tiny! So tiny, in fact, that you’ll have to look very hard to see them – if you can see them at all! They have teeth on their upper and lower jaws, in fact – but because they’re so small, it can be easy to see their mouths and think that there’s no teeth there.

Owners can often think that their axolotls don’t have teeth! This is because they’re so small – they’re not as prominent as teeth on other animals.

They’re not very sharp either, unlike lots of other animal teeth. This means that they can’t really pierce or chew their food with their teeth – they’re just too blunt and small for the job. They’re not hard enough for chewing either – in fact, they’re a little rubbery!

This means that axolotls can’t eat the same way we and many other animals do, by chewing food apart with our teeth.

Instead, axolotls just use their teeth to hold on to their food! They actually eat by sucking food in whole. As they can’t bite their food into smaller pieces, this means that they can only eat small food – they can’t safely eat anything bigger than their own mouth!

Food can get stuck in the gastrointestinal tract of the axolotl if it’s too big, which can cause problems like constipation and impaction. This is why it’s important only to feed your axolotls small chunks of food.

Axolotls are carnivores! This means that they only eat meat, whether they’re in the wild or in captivity. They love to eat smaller crustaceans, fish, worms, and insects. Exactly how much your axolotl will eat will vary, according to their size and age.

And, of course, the size of food that they can physically eat!

They love to eat live food too! Earthworms are great for axolotls to eat – although if the worm is too large for the axolotl to eat comfortably, then you’ll have to cut it up for them. You should wash any soil off the worm too, as this won’t be any good for your axolotl.

You can also feed them specially made pellets for axolotls. Good axolotl pellets will have all of the nutrition that an axolotl needs to thrive, and will come in convenient sizes for their tiny mouths!

This is a great way to feed axolotls, as it guarantees a good food source for them. It also removes risk of any possible infectious diseases that could come from live food.

As they are carnivores, it’s no good to try to feed them plant-based food. Not only will it not provide you axolotl with the nutrition that it needs, the axolotl likely won’t eat it anyway! Proper axolotl food given in the right amounts will get devoured by a healthy axolotl!

Remember, you only need to feed an axolotl every 2-3 days at most. They’ll need that long to digest their food! If you give them too much food, they might overfeed – which can cause them constipation! Remember, feed them in moderation, and in small pieces!

Can An Axolotl Bite Me?

Yes – axolotls can definitely bite you!

They will bite for self defense – for instance, to fend off an attack, or to warn an intruder off. They’ll bite at other axolotl – in the wild, axolotl are solitary animals. This means that they can be quite territorial, and may snap at other axolotl if they feel their space is being invaded.

If an axolotl feels annoyed, it might well attack with those tiny teeth!

They might well bite you too! They might mistake your finger for an intruder. Or they might think that your finger is food, and decide to eat it!

However, it’s nothing really to worry about – their teeth are so small and dull that an axolotl likely won’t even be able to break the skin. It can come as a little bit of a shock, of course – but it won’t really hurt! It’s more of a nip than a bite, so don’t worry.

An axolotl isn’t going to take a chunk out of your finger! This can happen during feeding time if you’re feeding them with your hands. They could well mistake your finger for a large worm and decide to make a meal out of it.

Best to keep your fingers away! Use tweezers to feed your axolotls instead – that way you won’t have to worry about getting bitten.

If it happens, don’t panic – the axolotl can’t do you any harm! You could hurt your axolotl if you panic. Don’t yank your hand back suddenly, or shake your hand trying to get the axolotl off.

The best thing to do is to be patient, and give the axolotl a bit of time to figure out that you’re not food. Yeah, it’s not perfect, but you shouldn’t have put your fingers anywhere near their mouth in the first place. The axolotl will give up trying to bite you eventually – it’ll figure out that it can’t eat you.

If the axolotl broke your skin, or left a mark, then you should immediately treat the area with an antiseptic. This is because axolotls can carry salmonella – as well as all of the bacteria that’s in the water!

This is another very good reason not to put your hands anywhere near your axolotl! If you do have your hands in the tank near your axolotl, be aware that they could try to bite you at any time. It can happen quite quickly, which can be quite startling.

So, remember, don’t panic, as you could well do your axolotl a lot more harm than it can do to you!

Yes, axolotls have teeth, but they’re not like a lot of other teeth! Instead, they’re small and rubbery – and they’re used to grip prey, not to bite it into pieces!

They just hold the prey in place while the axolotl eats – which means that the axolotl can only eat food that’s small enough to be swallowed whole!

They’ll bite to defend their territory, or just to make sure that they’re left alone. They’ll bite you too – and might even think that you’re food! They can’t harm you, however, and you shouldn’t have had your hand anywhere near them anyway.

It might be a little painful, but don’t panic or you could hurt your axolotl! Disinfect any bites to be safe from bacteria and salmonella.

There you are – a quick introduction to axolotl teeth! Hopefully you’ve learned something about axolotl teeth, and what can happen if an axolotl bites you!

link to Do Tiger Salamanders Have Predators?

To satisfy their voracious appetite, tiger salamanders have evolved into shrewd predators. That's also what makes them fun to own as pets. Feeding time is always action-packed. especially if you're...

If you're considering keeping an axolotl for the first time, you're probably wondering if they're easy to care for and if they have specific requirements. Axolotls are unique creatures, and...

Hello and welcome to Pets From Afar. I'm Glen. My daughter Siri and I are mad about axolotls in particular, and amphibians in general. I created this website to document our findings and experiences, as we learn more about the amazing world of axolotls, amphibians, and herping (observing them in the wild).

The information presented on this website is not medical or veterinary advice, nor should it be taken as such. Our website is supported by our users and we may a small commission when you view advertisements or click through affiliate links on our site or in our emails. However, this is at no extra cost to you and has no bearing on our opinions, reviews, comparisons, or recommendations. Thank you for visiting and for your support! 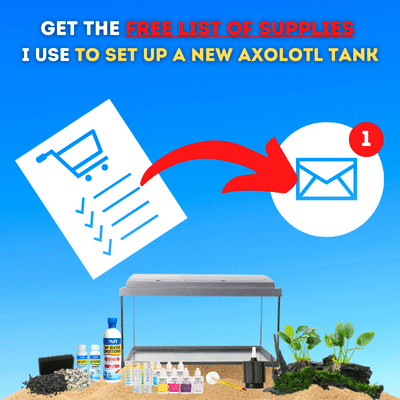 The list of items I use to set up new axolotl tanks was sent to your INBOX.

(Haven’t received it? Give it 10 minutes and check your SPAM folder).